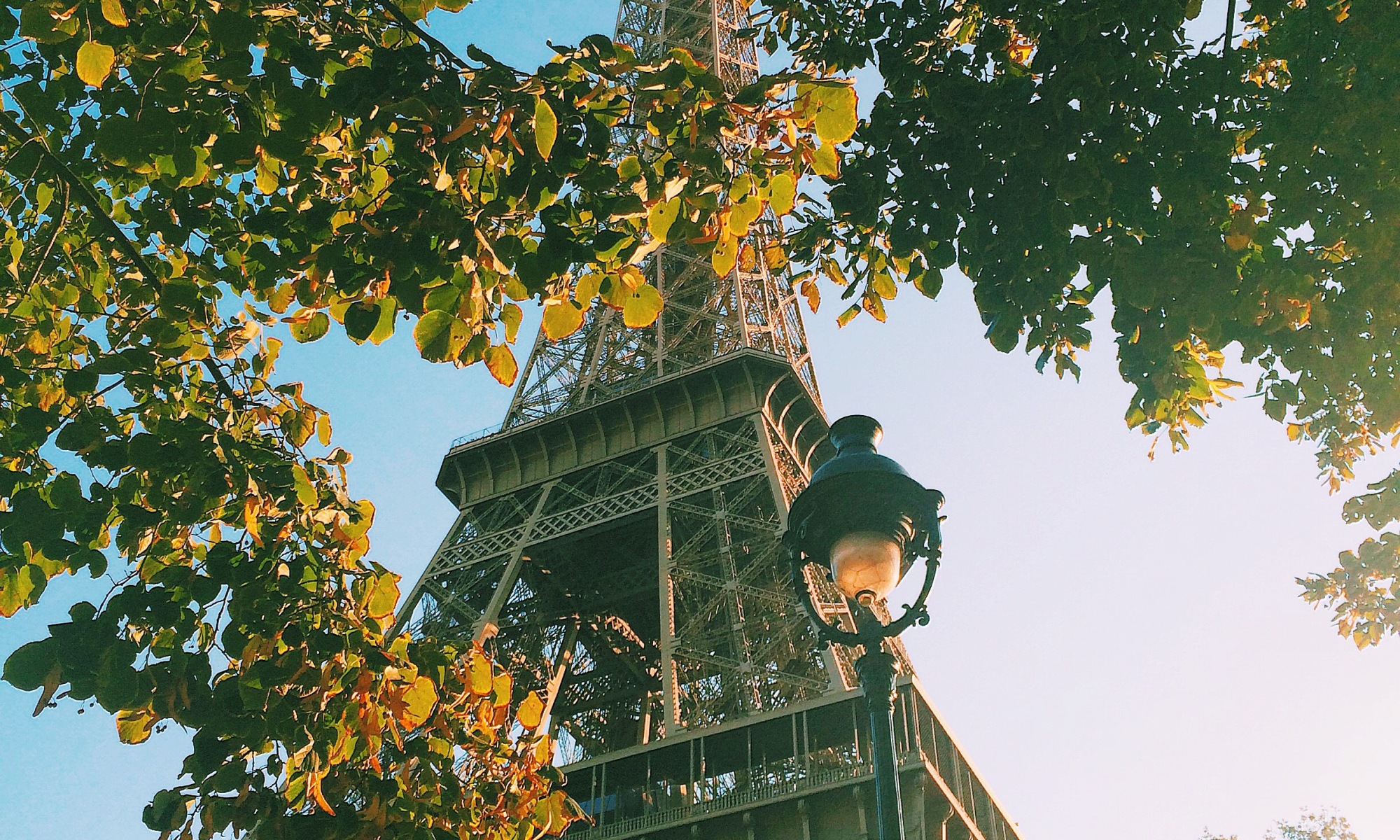 Audrey knew best, so now I give my reasons for why a traveler to Paris will always enjoy their time in the City of Love.

Ask anyone who’s seen my room decor, my notebooks, my cell phone cases, my Pinterest travel board, or my display of (excessive, it’s really way too much) jewelry, and they’ll name a common theme if they have eyes: Paris. I had an obsession with the Eiffel Tower long before I saw it in person; and standing under that magnificent iron lattice only served to multiply my adoration of the structure.

Any reports you’ve heard about the City of Love are more than likely based on truth: it’s covered in tourists, you’ll be greeted by “rude” French people when you speak English, and you’ll need to pull out a new loan to pay for each meal.

But the vibe of the city makes any hassle you’ll deal with more than worth it. The reasons are endless for Audrey Hepburn’s infamous quote, “Paris is always a good idea,” but no one would have the time to read such a long blog post. So I included my top 9 reasons for why Paris, truly, is always a good idea.

9) There is always something noteworthy going on in Paris.

No matter when you travel to Paris, there will always be a celebration or event (maybe even Paris Fashion Week!) you won’t want to miss. Even if the hype is greater than the attraction itself, as was the case for me this past time, it’s still worth it to be a part of a local event you didn’t plan for.

The first weekend of October happens to be the annual event called “Nuit Blanche” which translates in English to White Night (but really the French meaning is Sleepless Night). Millions of people from all over the world attend, and what I found most interesting is that you have to find out through friends, media, or Google where the event is actually being held. The committee that puts it on chooses new and unexpected neighborhoods all over the city each year, so it’s never known until a few days in advance where you’ll actually be enjoying the “show”. As for the event itself, the music, lights, and colored fog show were a bit exaggerated, and we left shortly after arriving. The red, white, blue, and yellow icicles in a second location were cool for a few pictures, but then we were off into the night once again, wondering what to do next. Thankfully, we were in Paris, which brings me to my next point.

When a city comes alive and even more active at night than it is during the day, you know it’s a place you want to be.

New York, Tel Aviv, Athens, Rome, Madrid, and of course Paris are just a few of the ones I’ve been to which can boast such a nightlife. Us 3 girls had no problem enjoying the Parisian sights illuminated in white-gold beams of spotlight and observing colorful characters having a photo shoot in the middle of the road, along with many other antics that only the bravery of night can bring out of people. 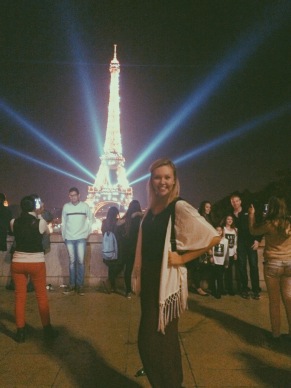 Fall
Any time of the year in Paris will have its own ethereal sense, so you can truly book a flight for the time that’s best for you and enjoy it!
However, I have to say that Paris in the fall felt like I’d stepped into a vivid dream: leaves on the trees were changing color to vibrant orange, red, and yellow; the crisp autumn air made breathing city air actually pleasant; and bundling up to walk around, dally through an open air market, and then enjoy a caffe latte and croissant to warm up…could anything be more perfect?

Summer
This is of course the most common time to travel and visit Paris, and I certainly enjoyed it two years ago in July. I happened to visit during France’s Independence Day, so the city was buzzing with even more life than usual. Of course it will be hotter and more crowded with tourists, so keep all of that in mind as you pack and book your trip.

Sometimes these guys get a bad rap, but how boring would city streets be without a dance crew tearing it up, a musician playing his heart out on the violin, or an artist telling each passerby they could be the next masterpiece on her canvas? Paris is brimming with talented street performers, so take a moment out of the hustle to stop and enjoy a show! (But don’t stop for the “luck”, three cups, or gambling games. Those are rigged tourist traps, and there are often pickpockets in the crowd.)

If you want to feel like a local, hear a lot of French being spoken, and maybe pick up a delicious lunch to take to a nearby park for a picnic, don’t miss an open air market in Paris.
They’re all over the city, and don’t worry about missing it one day…there will be 5 more open the next day. Here’s a list of Parisian street markets by day of the week, but you can always google and find them listed by what they sell, their location, etc.

4) Being the Typical Tourist is SO Fun

When I travel, my goal is to look and act so much like a native that I’m spoken to in the local language or to have a tourist ask me a directional question, thinking that I’m a local. I’ve been fairly successful so far, but when I’m in Paris, I’m so enraptured by the architecture, the fashion, the overall city vibe that I look like a tourist through and through. It’s also the only place I don’t really mind fitting that profile! I take the jumping picture in front of the Eiffel Tower, middle of the road Champs des Élyseès and Arc de Triomphe in the background snapshot, and of course I can never miss the Love Lock Bridge along the Seine River.

3) Walks along the Seine.

This will always be a highlight of Paris for any tourist. The city never fails to entertain with life size tic tac toe, mazes and a world map painted on the concrete, chalkboard walls to leave a note on, mini botanical gardens, or tempting hammocks swaying on the dock for weary passersby to take a break from the heat. You may just stumble upon a photography exhibit free to the public from a nearby museum. This was actually a perfect find for me, as I didn’t have time (or funds, really) to see any museums while I was there. Strolling through and appreciating photos of the year for an hour was just the art exposure that I needed!

Flashback Photo! 2 years ago I made my mark on the chalkboard wall: “Kelli was here”.

These unobtrusive green metal boxes attached to the fence may look boxy and pointless when closed and locked up in the evening. When tourists are out and about, you better believe these shop owners are open for business with their vintage books, magazines, and souvenirs. There may be an official name, but I just call them the “Green Seine’s”, and plenty of my business has gone to reprint paintings and postcards at these shops close to Notre Dame. 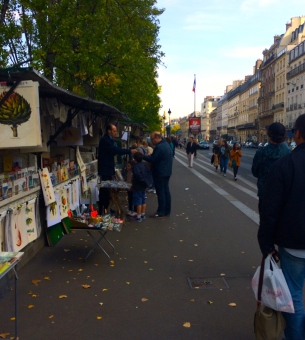 1) Paris is PRIME for people-watching!

You’ll never find such mixed diversity in the world, as there are people from everywhere imaginable here. It also might just happen to be Fashion Week in Paris, as it was for me, and observing the bold (to crazy and ridiculous!) fashion on the streets was enough to entertain for hours.

Also, you’re more than likely to make new friends. As Judith, Leen, and I were taking pictures in front of the Eiffel Tower, we met the nicest Koreans traveling around Europe. So of course we proceeded to take pictures together as a group!

Leave it to the classiest lady ever, Audrey Hepburn, to know where you’ll always find rich culture and make memories to last a lifetime.

Let the tall girl know what you think! Cancel reply